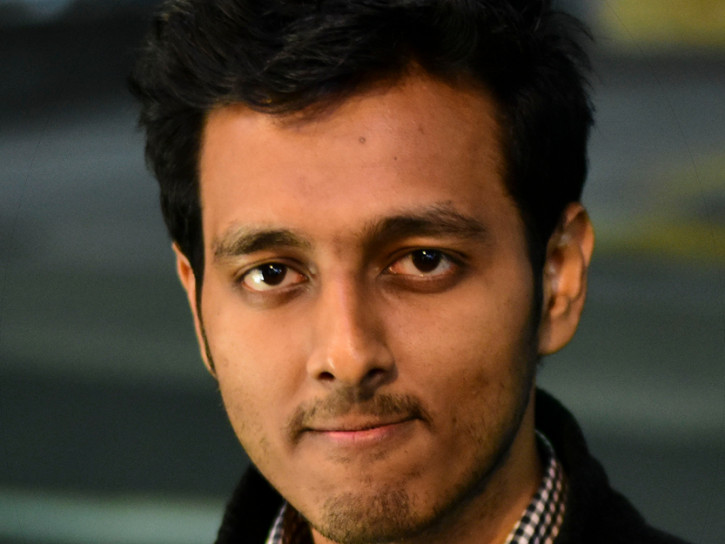 This research led Sifat to develop a non-contact magnetic sensor, which can be used to monitor overhead line activity and detect faults across electricity distribution networks. Sifat’s technology is a new approach to overhead line monitoring, and this small, portable sensor solution has the potential to be used globally.

Helping him to understand exactly what is needed by industry to get his product into the market, Sifat connected with the team at Wellington UniVentures who subsequently nominated him for the Emerging Innovator Programme.

Sifat’s team at Robinson Research Institute organised an industrial engagement workshop to learn more about research application, and it was during this time that Sifat met with Wellington UniVentures’ Commercialisation Manager (CM) Sam Wojcik and former CM Ashwath Sundaresan. The pair, along with General Manager Commercialisation, Hamish Findlay, encouraged Sifat to apply for KiwiNet’s Emerging Innovator programme, as they knew it would help him to better understand the commercialisation process and connect with industry leaders.

Ashwath introduced Sifat to the Emerging Innovator Programme and explained to him what it would look like and the support that is provided to get an idea off the ground.

Sifat says: “When I saw this programme, I saw this as an opportunity to get exposure across the industry. So far, I have worked in the academic sector, but I don’t really know about the language of the industry—I need to understand what the industry truly wants and tune my project to those needs. I’m grateful to Wellington UniVentures for introducing me to this opportunity. I’m really looking forward to tailoring my product so that it can actually be used across the New Zealand electricity distribution network, and hopefully even further.”

The electricity distribution network across New Zealand is extensive, with 98,549km of overhead distribution powerlines, yet it is around 70 years old and would cost a significant amount to upgrade. With increasing demand on the infrastructure caused by new technologies such as electric vehicles and the renewable energy generation, the aged network is prone to many different faults, which lead to unplanned outages.

Currently, distribution companies do not have enough visibility over the activity in their networks, meaning that there is a growing cost associated with faults. Sifat has developed a non-contact magnetic sensor-based scheme, that can recognise the non-linear patterns of system fault signals. The sensor can be installed onto an overhead line pole and record the data—this is the core of the technology. Machine learning algorithms can look at current variations within the power lines and use machine learning algorithms to classify the fault type based on patterns.

At Robinson Research Institute, Sifat has established a test facility, which allows him to replicate any kind of fault, without having to disrupt the existing distribution networks in any way. Using the data from this facility, the machine learning model has been developed and is able to detect and classify faults with 95% accuracy.

This system can be applied to the electricity networks in New Zealand and networks globally, including our Trans-Tasman neighbours. For example, in Australia, many forest fires start from an overhead electricity wire getting too hot or the conductor breaking down because it is old—this is known as the down conductor scenario. When the conductor falls to the ground, this can cause a fire. Being able to monitor the health of a line and detect faults at an early stage will help prevent this.

Sifat is developing his sensor so that it can accurately detect faults and keep track of networks which are prone to faults before damage occurs. The sensor will allow electricity companies to react to faults and scenarios quickly and efficiently, increasing consumer trust and improving electricity continuity.

What do you hope to gain from the programme?

Sifat has three main goals that he hopes to achieve during this time on the programme. First, he wants to engage with the industry and be mentored by industry leaders. Moving away from a solely academic career, Sifat is keen to learn more about the commercialisation process and the steps he needs to take to get his product to market. Second, he wants to understand the customer, what they need and what they want the technology to look like. Third, he wants to understand the market and what other technology is out there, allowing him to develop his idea to be commercially ready.
“The programme offers the support of a mentor and that will be an incredibly valuable part of my journey as I get to grips with taking my research from the lab to market,” says Sifat.

Hamish Findlay explained, “Sifat has done a lot of work to get his idea to this stage. The technical ability is there, and we are excited to help him navigate his way along the commercialisation pathway and create impact from his idea. The Emerging Innovator programme is a great next step for Sifat as he develops his idea into a product.”